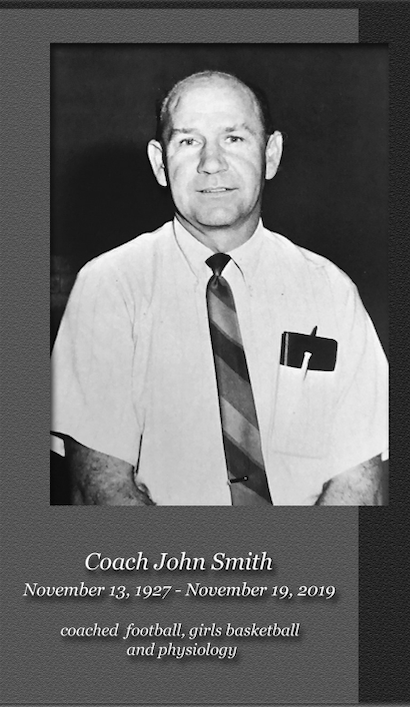 John Eldred Smith, 92, of Macon, Ga., passed away Tuesday, November 19, 2019 at Coliseum Northside Hospital.
Born on November 13, 1927 in Collinsville, Ala., John was the son of the late Walter Smith and Nena Edwards Smith. He was the youngest of nine with five brothers and three sisters. Mr. Smith graduated from Collinsville High School in 1946, graduated from Jacksonville State Teachers College with a four-year degree in 1950 and also graduated with a Masters and six-year degree from the University of Georgia in 1959-1962.
John married Carolyn Stovall on April 22, 1950.  They celebrated 50 years of marriage in April 2000. Carolyn passed away June 15, 2009 at age 79. One year shy of their 60th anniversary.
Coach Smith was a teacher and coach for 37 years with a two year break for the military service in the U.S. Marine Corps. His career consisted of Tallapoosa High School 1950-1952, Camden County 1954-1959, Lions High School 1959-1961, Forest Park Senior High School 1962-1971, Morrow High School 1972-1976, Forrest Park Senior High 1977-1978, Riverdale High School 1979-1987.   He retired in June 1987.  His love of coaching and teaching was shown in his conduct and work ethic every day for 37 years.
His coaching accomplishments consist of: Girls basketball 3AAA Region Champs and State Champs in 1970 at Forest Park High School, Girls 2AA Region Champs at Morrow High, three straight years and one trip to Semi-finals at State Championship. Coach Smith was named Georgia High School Girls Basketball Coach of the year in 1970. While Head Defensive Coach of Forest Park Senior High, the 1968 football team won the region and was runner-up in the state championship game. He was the Head Coach of Morrow Senior High Football 1974-1977.
Coach Smith's personal athletic accomplishments: Quarterback in 1947 for the Jacksonville State team that went unbeaten and untied. They beat Troy State in the Paper Bowl. In 1948, J St only lost one game and beat Livingston College in the Paper Bowl. He lettered all four years at Jacksonville State. In 1983, at Jacksonville State's 100th year celebration, he was named one of the schools top 100 athletes in the history of the school. This included all sports male and female. In 1999, he was inducted to the DeKalb County (Alabama) sports Hall of Fame.
Survivors include one son, Jeff Smith (Dorena) of Macon, Ga.; one daughter, Cindy Bresee (Dr. Stuart) of Knoxville, Tenn.; one sister, Floradean Pendergrass of Collinsville, Ala.; seven grandchildren:  Sara (Yann Baquet), Alex and Kaitlin Bresee, Brittnee, Tarra, Brandon and Nicolle Smith and one great-grandchild, Kayden Smith. He is also survived by a special friend and caregiver, Debra Lundy. Mr. Smith was preceded in death by his wife, Carolyn Stovall Smith; one son, Perry Stuart Smith; five brothers and two sisters.
Funeral services were held at 2 p.m. Sunday, Nov. 24, in the Chapel of the Strickland Funeral Home of Hartwell with the Rev. Carter Tucker officiating. Burial was at the Nancy Hart Memorial Park next to his wife and son.
In lieu of flowers, memorials may be made to the American Cancer Society or charity of one's choice.
The Strickland Funeral Home of Hartwell was in charge of all arrangements. Online condolences can be sent to the family at www.stricklandfh.com