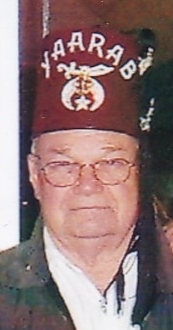 Donald "Pop" Ellis Johnson, age 84, of Triple J Ranch Road, Canon, Ga., passed away early Saturday morning, March 14, 2020 at his home following a sudden illness.
He was born on July 7, 1935 in Birmingham, Ala., to the late Sam Johnson and Anna Self Johnson. He owned a chain of pizza restaurants called Papa Don's and a repair service. Donald was a member of Nancy Hart Masonic Lodge #690, a member of the Yaarab Shrine Temple and Lake Hartwell Shrine Club. He was a U.S. Army Veteran serving his country in the 82nd Airborne in Korea. While in the Army he was a boxer.
He is survived by his wife, Lucille Beck Johnson of the home, sons, Mike Johnson and John Thompson of Canon, Ga., daughter, Becky Partin of Seneca, S.C., brother, Jerry Johnson. Two grandchildren survive. He was preceded in death by his parents, and siblings, Pete, Buddy and Kenny Johnson.
Services celebrating his life were held at 2 p.m.  Wednesday, March 18, from the chapel of Coile and Hall Funeral Directors with Masonic Rites. Rev. Cory Pulliam officiated. Inurnment was at Memorial Garden of Prayer Mauseleum. Memorials may be made to Lake Hartwell Shrine Club, 85 Triple J Ranch Road, Canon, ,GA 30520.
Coile and Hall Funeral Directors, 333 E. Johnson Street in Hartwell was in charge of arrangements.
An online guest registry is available by visiting www.coileandhallfd.com.